KZMU is a grassroots, community radio station isolated in the dramatic landscapes of Canyonlands and the Colorado Plateau. Our home is the small tourist town of Moab, Utah, more than 100 miles from the nearest city. For 27 years, KZMU has truly been an aural oasis in the desert airwaves of Southeastern Utah.

KZMU is also about music, all kinds of music, connecting community members to one another, to the wider world and having fun while we’re at it.  You can be sure that whatever you hear will be spontaneous, fun and full of positive energy. Indeed, our mission statement is to “inform, educate, engage, entertain and delight.” 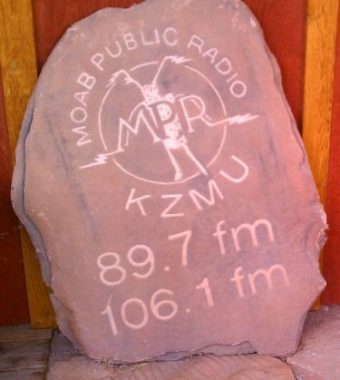 We were born in 1992 in a dilapidated old trailer, a cast-off from the National Park Service. Seven years later, we completed our modest but comfy permanent station high atop Rocky Road overlooking the Moab valley with the help of our loyal listeners who made it financially possible. In 2008, with the assistance of a grant from Rocky Mountain Power and the support of listeners like you, the KZMU studio became solar powered.  Now we are the greenest and wildest sound this side of the Rockies!
We wouldn’t exist without our Moab community — without monetary support from our underwriters and local donors, without the energy and engagement of our DJs, producers and guests, and the many who listen online and support us from afar.  Thank you!

KZMU's mission is to "inform, educate, engage, entertain and delight."

We have mostly two-hour shows that feature the intuitive whim of the DJ the the helm, allowing maximum creativity and freedom.  We’ve got 24 hours of local programming, with live, local volunteer DJs usually covering the clock from 9 am to around midnight. Our overnight jukebox rotates thousands of rare and tasty tracks from KZMU’s library.

We also focus on area youth.  “Children’s Shine Time” airs on Saturday at 9 am with parents and kids (usually between 6 and 8 years old) playing music that inspires and amuses.  “Tween Time” airs at 4 pm Saturday.  Our daily module “Word of the Day,” produced in cooperation with Moab’s Helen M. Knight Elementary School and Moab’s Charter School, features fifth and sixth graders spelling and defining challenging words, and airs Monday-Friday at 8 am, noon and 5:59 pm.

We strive to create a positive difference in the lives of the people in our community. We base our programming on the area’s listening needs and encourage community participation in all activities. We seek to provide our community with opportunities to exercise their First Amendment rights, regardless of beliefs or circumstances. While the station remains available and responsive to all, it is required to be divested of any financial or commercial interests. Our call letters say it all, “Krank Zee Music Up!”

Our call letters say it all, “Krank Zee Music Up!”

We also air Science Moab, produced by local soil ecologist Kristina Young, featuring science news and interviews, plus questions from kids about science (Fridays at 11:30 am).